Space Haven revolves around keeping the crew alive and satisfied as they journey onward out into space. The characters are simulated to make them more than just simple robots walking around. Various elements, like gas, noise and temperature and relationships affect how the characters feel in the world of Space Haven. 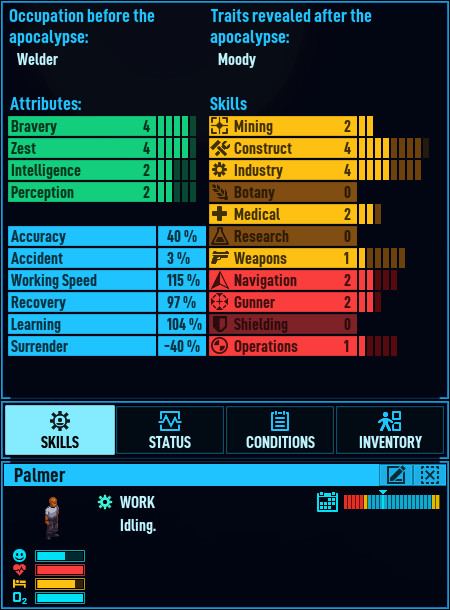 The backstory for each character is generated randomly by giving them a past occupation and a revealed trait after the apocalypse. This combination aims to give the player a peek into the characters real self.

Meaning of the "Traits revealed after the apocalypse"

How the real character of a person is revealed when a person faces dire situations or extremely challenging circumstances (World ending, the Apocalypse). How others see them behave completely different compared to how they were in a normal life, the underlying core of the person now shines through in challenging times.

The characters have traits, which give them either positive or negative effects. The traits can affect both the mental state and the individual statistics of characters. They might also make the character immune or more sensitive to various things.

Example: A character with a wimp or a peace-loving trait will be more prone to surrender in combat. Their surrender rate is higher.

Skills affect how well a character is able to handle tasks related to a specific skill, mostly in terms of speed and accident rate. Skill levels are shown as a number, higher number is better.

The crew management menu shows the character skill levels related to a specific job category as dots in the UI box used to assign higher or lower priority level.

The crew priorities section in the crew management menu is where you get to prioritize which kind of tasks each crew member works on.

Leveling Up in Skills

Crew members will have a natural ability to become great in one or a few skills, but they will also have their limitations. Skill levels range from 0 to 10, and the crew members will improve their skill levels as they carry out tasks related to a skill.

A character has 4 attributes determining the base statistics of the character.

These attributes give base values for both the character attribute statistics but also to the mental state in form of mood, health and energy. 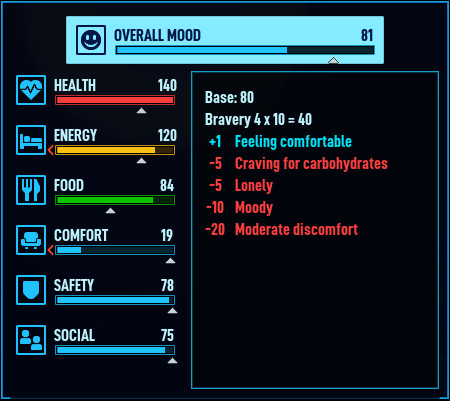 The character needs and their current mood is shown under the status tab. Each category can be viewed to see what kind of conditions are currently affecting that specific category.

The main mood indicator is OVERALL MOOD, but there are also subcategories which can affect overall mood and eventually lead to a mental breakdown. The subcategories are:

Once a subcategory falls down low enough it will generate a condition, which affects overall mood in a negative way. Therefore, if enough subcategories drop low enough at the same time the overall mood will drop very low and there is a risk for a mental break.

The particular state that something or someone is in, or has some type of condition, like an illness. Condition is used very broadly. Examples of conditions are shat pants, received a flirt, having a flu, wearing a spacesuit. These conditions give either negative or positive mood effects for a character.

Conditions are the base for having the elements of the outside impact the character in various ways. Examples: If the temperature is too high it will create a condition affecting the character, or if an alien bites the character they will receive a condition, with certain negative effects. 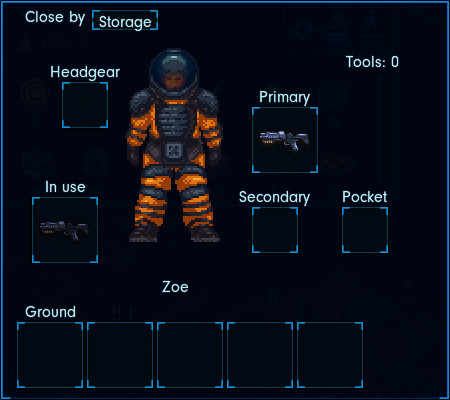 The inventory allows you to equip the crew member with various weapons and other items. This is done with a simple drag and drop mechanism. If the item will not stick to a UI box it means it is the wrong item type.