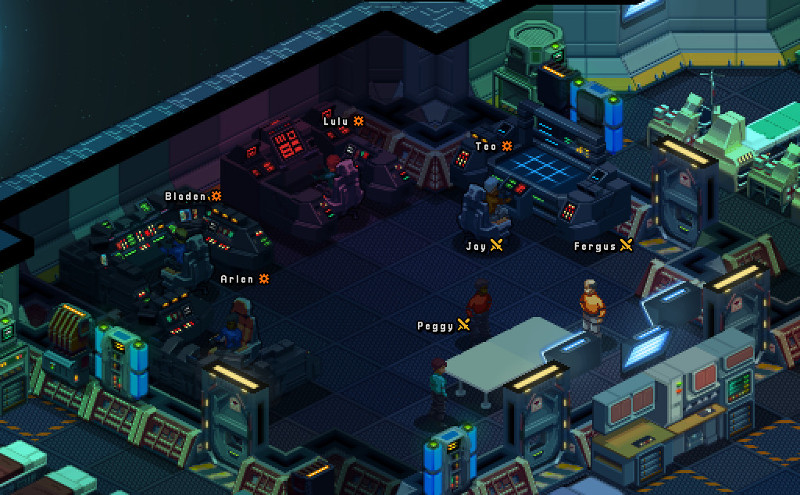 All of the bridge consoles and other systems are important in ship-to-ship battles, as each one of them enables important actions and maneuvers.

Controlling and assigning priorities for the consoles/systems

All of these consoles control certain systems respectively, and the systems menu is used to assign priorities (Alert modes). You can use the systems menu to specify how you want crew members to behave. If the situation is critical it's possible to assign a crew member to occupy a post at all times.

However, this needs to be combined with individual crew priorities. Makes sure there's at least one crew member with a priority for a certain system per spaceship in you fleet.

A ship's overall health is divided into hull stability and shield strength, which can be strengthened with hull stabilizers and shield modules respectively. Power will also play a part, as attack and defense systems will be more prone to consume larger amounts of power.

Various turrets will have their own specifications regarding hull stability damage and shield damage, in addition to these special properties can be added. Examples of special properties could be a turret with projectiles causing internal fires, another turret may act much like an EMP turret shutting down power within an area.

A Hull Stabilizer reinforces the spaceship's frame, strengthening it and generally improving structural integrity. Multiple Stabilizers can work in unison to bolster the hull far beyond its normal limits.

A ship's hull is not generally penetrated until the hull stability is lost, at which point the hull stabilizers will be overloaded and explode, along with other hull integrated elements like turrets, shield modules, hangars and more inevitably causing the whole ship to explode to a good degree. It's still possible to save the crew and the ship after this, but generally a scenario like this is devastating. Roof elements, like turrets shields and scanners, can be targeted and destroyed individually.

Shields work together to protect the ship from damage. While certain turret types may ignore shields, they protect against the basic projectile types. In these situation hull stability damage can only be inflicted when shield strength has been depleted. Shield amount is strengthened by building more shield generators. Shields are operated via the shields console.

One shields console is enough to control all shields on a ship.

Shields efficiency (How fast they recharge) depends on a few factors:

Turrets function as the attack device of your spaceship. Targets can be assigned freely for turrets, meaning you will be able to place a target for them at any tile position. Their accuracy is depicted as an area radius, and projectiles from the turret will fall within this radius. Turrets are operated via the weapons console.

One weapons console is enough to control all turrets on a ship.

Turret efficiency (How fast they fire and recharge) depends on a few factors:

Feeling curious and want to see what's going on in other faction spaceships currently in the sector? Build a scanner and you're able to peek in. The scanner will come in handy when trying to determine whether this is a crew you want to mess with, or where to direct your more powerful special turrets.

Scanners are operated via the operations console, and each scanner module has its own cool down regarding how often it can scan an area. Note that scanners only work on ships with functional power generation. Derelict ships cannot be scanned due to them not having a functional power grid.